GCDC was invited to the inaugural network gathering of the Southern Reparations Loan Fund (SRLF). SRLF has been an active loan fund in the South for a few years, helping to finance 4 projects to date: the Renaissance Community Co-op in Greensboro, NC, Rebel Threads printmaking co-op in Miami, FL, Emma Community Power in Asheville, NC, and one other project. SRLF had been a member of the Working World, an international leader in non-extractive finance and progressive philanthropy, but has decided that instead of being a lender itself, it has pivoted into the role of being an umbrella organization for a multitude of smaller loan funds working on the ground with those most impacted by extractive (or “zombie”) finance. GCDC was invited as a proto-loan fund, exploring what lending in Georgia might look like. 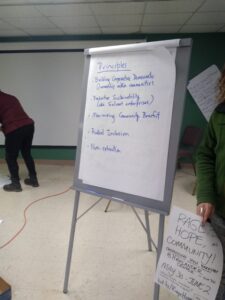 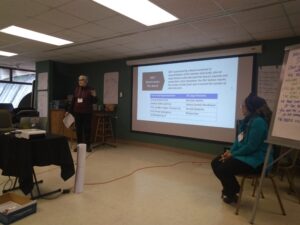 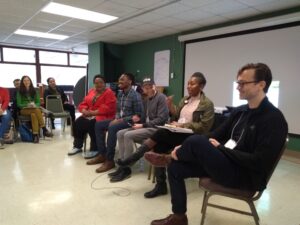 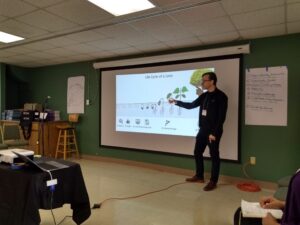 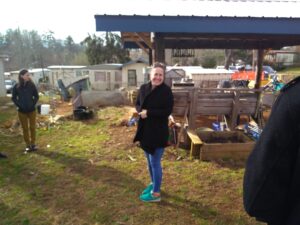 Day 1 was “the why”. To the SRLF paradigm, why make non-extractive loans to disenfranchised and oppressed communities? Because changing the ownership of capital to be inclusive and heal the wounds of extractive finance will mean transforming our world into one where people own the surplus value of their labor, and the capital necessary to be productive, healthy, happy and in community without the draconian shadow looming overhead. This sounds lofty, and it is, but what I so deeply admire about the work Ed and Marnie do (Ed and Marnie are co-Executive Directors of the Fund for Democratic Communities, an anchor partner with SRLF) is that they so effectively soar into the abstract and then dive deeply into the earth, the grassroots, to offer a method of 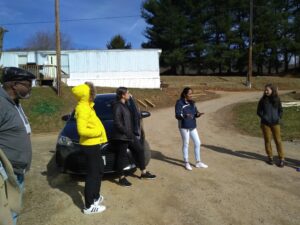 finding real solutions to those systemic problems. There is a cosmology here you might say, of what Ed called Bones, Blood and Dirt. And in this story of human history, the enclosure of land and labor into commodities was physically assured by military might (the club, the gun, etc.), but then psychologically assured by modern extractive finance. Thus, to address finance and put it back into the hands of people who do the labor that creates surplus value, and capital, will mean transforming the whole system into another world that works for the many, not just the few.

Day 2 was the how. The mechanics of Seed Commons: The national loan pool seeks philanthropic capital to keep itself solvent. The fundraising is done mostly by Brendan Martin (Working World) and Marnie Thompson (F4DC) who are connected to alternative philanthropists (like the Chorus Foundation, Resource Generation) and seek out values-aligned donors and lenders for the main pool. This seed funding is then applied for by primarily people of color led worker cooperatives that are in alignment with the Seed Commons values, to be assisted by the micro loan funds on the ground near those co-op steering committees (also aligned with SC’s values), as well as to be assigned a loan coach from Seed Commons to help ensure the success of the co-op. The loan coach is modeled on the “padrino” or “godfather” model used by the Mondragon co-ops. There is an application process to access the national pool of funds, all of which is processed through a software called Madeline (developed for Working World). Rarely will the selection committee say “no”, but they will often say “not yet, work on these things…” before a loan is first made. The values of Seed Commons are: non-extractive finance (see above), building solvent businesses, and paying it forward. On paying it forward, once the co-op achieves profitability, it begins to repay the loan, but only a small % goes back to the national loan fund. Most of it goes into the local pool, which will then be used for another co-op project. If the co-op defaults on the loan, nothing will be repaid by the co-op. Intentionally, these are non-collateralized loans. The loan funds are truly sharing the risk of default, but working closely with the projects to help defray this possibility of default. So far, this method is working and the repayments have been consistent.

Day 3 was next steps. Each loan fund used a Getting Started worksheet to help plot out where their organization is now, and who might need to be involved to get a proto loan fund to being a bona fide loan fund. We also laid out next steps, which for GCDC I defined as:

From here, GCDC will explore how this all might work in Georgia. The board of directors and ED will be going into strategic planning soon to more deeply answer these questions. But I can say without a shred of doubt that I walk away from Germinate feeling inspired and challenged, and want to see this great work growing in Georgia soil where the work of repair is so crucially needed. It was touching to hear people share so deeply about their relationships with money, and articulation of a new vision of people in relationship with money they own, because it came from the sweat of their brows, and their ancestor’s brows. Stay tuned!