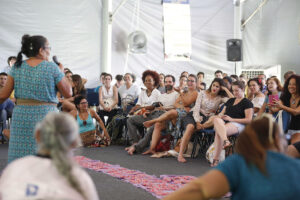 Y’all, happy new year. In the wake of multiple pandemics, from racism to COVID-19, wild fires, women of color flipping Georgia Blue, a Christmas Day bomber, and so much more, it’s definitely time for a breath, some tea (or wine) and reflection. If you’d indulge me, I’d like to reflect some on my perspective on … Read more2020 Recap

Join us for a fun and interactive webinar, hosted by Georgia Cooperative Development Center Board Director and Founding Board Director of the Georgia Center for Employee Ownership, Tom Strong. The topic will be how to use open-book management techniques to manage cash flow in crisis (such as COVID-19). Maintaining positive cash flow is crucial to … Read moreCash Flow Management Free Webinar Tues 5/19 8:00 PM EST

The Up & Coming Food Co-op conference is a wonderful annual gathering of peer startup food cooperators from across the US, all focused on supporting each other in working toward opening new community owned grocery stores. 2020 was no exception to this, and for my first year attending, I had a blast! Hosted by the … Read moreUp & Coming Food Co-op Conference 2020 & GCDC!

Happy new year, world! Out with 2019, in with 2020, and for Georgia Cooperative Development Center, we have a new mailing address. Going forward, please use: Georgia Cooperative Development Center c/o Audrey Griffin 315 College St. Carrollton, GA 30117 We have discontinued use of the PO Box 307 in Athens, GA, and will be unreachable … Read moreNew Year, New Mailing Address

The Georgia Cooperative Development Center exists to help co-op businesses in Georgia succeed, whether they are startups or existing businesses. We started our nonprofit organization because we saw that there was a need: people wanted to start co-ops, or grow their existing co-op, but they didn’t know where to turn for help. We knew there … Read more2019 in Reflection

You are invited to join Georgia Cooperative Development Center for an evening webinar Tuesdsay, December 17th at 7 PM EST. Our topic will be our 2019 Georgia Co-op Needs Assessment: Findings and Takeaways. You can RSVP by emailing us at Matthew@georgiacoopdc.org. This will be an hour webinar, completely free, though of course donations are appreciated … Read moreNeeds Assessment Webinar Tues. Dec 17th, 7 PM EST

Georgia Cooperative Development Center, in partnership with Florida Cooperative Empowered Economic Development and La Liga de Cooperativas de Puerto Rico submitted a proposal “Youth-Owned, Worker-Run: the Future Cooperative Business Leaders of the US South” which was accepted, and is getting a shoutout for this year’s Eastern Conference for Workplace Democracy! Our session will focus on youth worker co-op development in … Read moreWe’re Going to Baltimore!

Check out Executive Director Matthew Epperson presenting Georgia Cooperative Development Center for 1 Million Cups Athens on May Day 2019. 1MC is a project of the Kaufman Foundation, which believes that it takes a million cups of coffee to successfully launch a new business. In this video, Matthew details some of the history of both … Read more1 Million Cups Presentation for Georgia Co-op Development Center